Project Freedom4all at the festival Dach-9 in Minsk


Project Freedom4all at the festival Dach-9 in Minsk 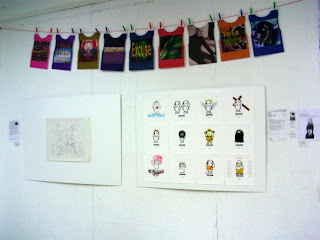 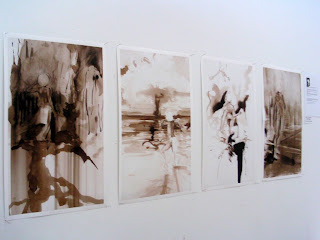 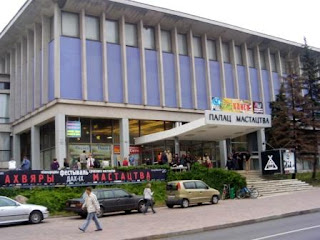 The Netherlands project Freedom4all  received a fresh perspective when artist Alexander Rodin, the initiator of the International Festival Dach-9 in Minsk, capitol of Belarus, invited Dutch artists to take part in it as well.


About the project Freedom4all
Friday 15 May till Friday 26 June 2009
In 2009, COS Zeeland from Goes (center for international cooperation) celebrate 25  year old jubilees. To celebrate this does they in association with CBK Zeeland among the other things by organising a culture project called “Freedom4all”. The topic the situation of refugees/migrants in province  of Zeeland in relation to the program “Four Freedom” has been formulated by Roosevelt academy.
Six artists can be inspired by the tale of migrants and make work which is exhibited at CBK Zeeland in Middelburg. The artists are: Wido Blokland, Ans Couwenberg, Tamara Dees, Marcel de Jong, Ludmila Kalmaeva and Paul & Menno the Nooijer.  Every artist or artist duet makes a triad works. Every work has a format of 100 x 70 cm (altitude x breadth). The work arises under a huge scanner that state established at Zeeuws Archief. The picture which arises here is converted at “Printing-art-studio” into 12-kleuren pigment print. Stuck on dibond and behind shining acryl plate (so-called Diasec) the work is presented at CBK Zeeland. Photographer Martijn Doolaard from Hoek made a portrait of all migrants and artists that everybody can see in the time of the exhibition. These portraits are accompanied by short texts concerning the migrants and the ideas of the artists for the art work. The texts have been written by  Els Koolhaas - the worker of the refugee organisation.

Two of the participants of the initial Freedom4all project held in Middelburg, The Netherlands, responded to this proposal. And these were Wido Blokland and myself, Ludmila Kalmaeva (http://www.kalmaeva.eu/
For his part, Blokland decided to show his series entitled: Apocalypse, which was connected to but a variation of the Freedom4all project’s theme.

The conditions of the Freedom4all Middelburg exhibition were to show only three designs. However, I made an entire series of six works that I wanted to show in Minsk, and took the initiative to transport these, along with other works by participating Dutch artists, with on the train to Minsk.
Hans Bommelje and Stein Bentall, Dutch artists designing a project they called, Bunny Power ( http://www.bentallbommelje.com/), joined the group as well. It’s a sort of ‘do it yourself’ project, expressing one’s own perspective of ‘rabbit’. Ramon de Nennie, with his work Red Thread, and Barbara Jean, with her project Mene Mene, Tekel, Ufrasin [trans. ‘Writing on the Wall’] (http://www.artifuse.com/), were among other participating artists.
The festival Dach-9 opened in late August, which you can both read and see more of by clicking on the following links: http://www.bellabelarus.com/en/content/view/136/11/http://www.youtube.com/watch?v=eax8OXzxXtM The works themselves arrived in time for the opening; yet, I arrived late, coming straight from the station to the exhibition hall of the Palace of Art. The festival was holding two exhibitions: on the first floor was Dach-9, where under one roof artists of different countries gathered to display their works. On the second floor was the Victims of Art project by Alex Rodin and Zmitser Yurkevich, who is known as Mitrich. Works of other artists reflecting the Victims of Art project’s theme were included in this second exhibition as well, which has enabled me to launch the Apocalypse series by Wido Blokland .

On the wall directly opposite this series were two photos of naked women with heads in the form of eggs by Vadim Kachan (http://allday.ru/index.php?newsid=76237
http://www.znyata.com/kachan/index.php). These corresponded well to Blokland’s naked male figures in his Apocalypse series.

The day I arrived in Minsk, I saw that Exhibition Dach-9 was arranged with pictures stacked everywhere in front of walls but not yet hung. As it turned out, a place to exhibit our work wasn’t planned. So, Alexander Rodin quickly reorganised the other artwork on exhibit, making wall space for us. I then rushed around and hung up our works to let everybody see that the space was now occupied.

When I returned the following day, I saw that our pictures were actually hanging too close together. In comparison, the rest of the exhibition was well spaced. Our corner, I observed, had lost its spatial harmony because of the clutter of too many entries. So, what did I do? I reconstructed my exhibit by completely removing my own works. I made this hard decision because the sizes and color schemes of mine had now conflicted with the rest of those of the other artists. It was a tough decision to make, indeed.